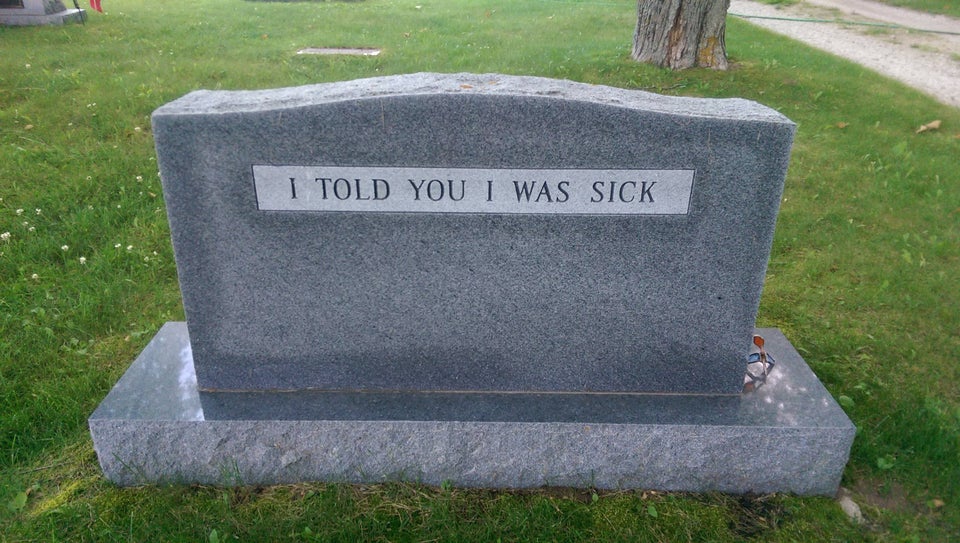 Will someone please explain to me how a person’s literal death is evidence that they weren’t actually sick at the time they died or ever?  The “I Told You I Was Sick” tombstone may (or may not idk) have been around as long as tombstones themselves have been around and it is even cataloged in a collection of “curious epitaphs” as the epitaph of an ancient hypochondriac.

The epitaph.  Of a hypochondriac.  Hmm.  While I process that very concept a moment, I Google “hypochondria” and find that the word doesn’t mean exactly what I thought it meant.  Or rather, the origin of the word itself was nothing like I had assumed.  Apparently, the very concept of unverified/unverifiable illness causing patients extreme physical and mental distress originated from complaints involving the abdomen.  Why doesn’t that surprise me at all.  From Wiki:

Among the regions of the abdomen, the hypochondrium is the uppermost part.  The word derives from the Greek term ὑποχόνδριος hypokhondrios, meaning “of the soft parts between the ribs and navel” from ὑπό hypo (“under”) and χόνδρος khondros, or cartilage (of the sternum).

The term hypochondriasis for a state of disease without real cause reflected the ancient belief that the viscera of the hypochondria were the seat of melancholy and sources of the vapor that caused morbid feelings.  Until the early 18th century, the term referred to a “physical disease caused by imbalances in the region that was below your rib cage”.  Robert Burton’s The Anatomy of Melancholy (1621) blamed it “for everything from ‘too much spittle’ to ‘rumbling in the guts’.

Bolds mine.  Apparently, people have been presenting to doctors for a long, long time complaining of upper abdominal pain,  chronic nausea and/or drooling, and the dreaded intestinal gurgling that often foretells an impending Crohn’s flare and they had morbid feelings about that.  You don’t say.

I should mention here that capsule endoscopy, which is currently the only way to get diagnostic imaging of the lining of the small bowel, is a very new technology that’s extremely expensive and often not covered by insurance.  Before modern imaging technology, including capsule endoscopy technology, diseases of the upper part of the abdomen in particular were virtually undiagnosable.  Due to its inaccessible location, in practice, even today, for many if not most people getting a reliable diagnostic image of the hypochondrium (!) or the upper part of the abdomen and gastrointestinal tract is impossible.

In my own case, I had positive findings at the very end of my terminal ileum which were imaged on a colonoscopy suggesting that there were lesions further into the small bowel as well, but there was no way to tell for sure except to do a capsule endoscopy.  I paid out of pocket for both the colonoscopy and capsule endoscopy and my expenditure paid off: while there were a handful of lesions visible via colonoscopy, the entire run of my small bowel was covered in lesions, including aphthous ulcers which were too numerous for the doctor reviewing the images to even count.

Aphthous ulcers are canker sores y’all.  Now, I’m not sure how innervated the small bowel is compared to, say, the inside of the mouth, but we all know canker sores are almost unbelievably painful and I had literally hundreds if not thousands of those motherfuckers.  In my hypochondrium.  I doubt I possess the writing skills to describe what that felt like, but to characterize my feelings about it as “morbid” is probably technically correct and yet a vast understatement at the same time.  After 2 years attempting to treat this hideousness with Western medicine failed and I was only getting worse, I was planning to hang myself in the privacy of a hotel room before I decided to abandon my life and possessions and move 1000 miles away to treat myself with medical cannabis.

Currently I am sitting with the idea that the very concept of hypochondria seems to have originated with complaints of the upper abdomen and processing what that likely means for myself and everyone.

Until a few years ago, upper abdominal disease was the very picture of invisible illness and for most people, who don’t have access to bleeding-edge imaging technology, it still is.  If I am reading this history and etymology correctly, it seems clear that every accusation of “hypochondria” since then originated there, even when referring to unverified/unverifiable complaints involving other body parts and systems that weren’t as literally invisible.  That seems important and the concept of patriarchal mission-creep comes to mind, where dismissing most or even all of women’s complaints becomes possible as “a ratchet effect spawned by initial success.”  In this case, the initial male “success” of demeaning and dismissing women with upper abdominal complaints — and negative feelings about being ill — when we presented for medical care.

Of course, all imaging technology is relatively new, but unverifiable upper abdominal disease has probably given people grief the longest.  But thanks to capsule endoscopy in particular, the existence of upper abdominal disease has been rather vindicated by now, hasn’t it?  And yet, we still have and use the “hypochondria” word extensively, especially when describing female patients who present to doctors with relentless, disabling and yes, psychologically distressing physical pain.  Even when we are vindicated, such as in the case of Morgellon’s disease which has existed only as myth until literally last year, our vindication is never broadcast widely so it’s hardly effective; women remain “hypochondriacs” regardless.  Doctors demeaning and dismissing sick women remains acceptable regardless.

Honestly, considering the evidence, I’m starting to think that any woman presenting herself for Western medical treatment is prima facie evidence that whatever else she may suffer from, she also practices self-harm and suffers from authoritative dyskinesia* (the involuntary/thoughtless movement towards patriarchal authority instead of moving quickly away from it in all its forms) or end-stage necrotizing handmaiden’s disease,* where her instincts and skills of self-preservation under a system that actively hates her have begun to, or have already, died.

*Re: authoritative dyskinesia and necrotizing handmainden’s disease.  I can make shit up too.

4 thoughts on “The “I Told You I Was Sick” Tombstone Gag. That Shit Just Never Gets Old. A Halloween Hypochondria Post.”